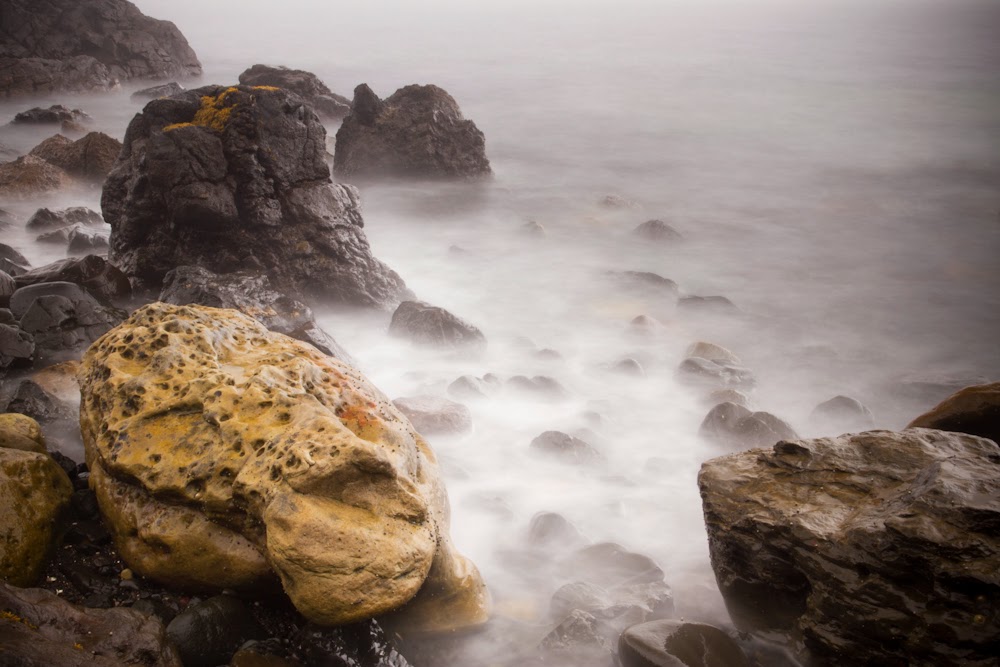 In the previous blogpost, I included a photograph of volcanic rock at Carsaig, Isle of Mull, being overgrown by fresh, green foliage.  Carsaig is full of contrasts and, in fact, I was standing at exactly the same point, facing in another direction, when I took this photograph.

This was more of the kind of image that I had in mind, and which drew me down to Carsaig on this inclement day.  I’m always struck by the dead and destructive desolation of the volcanic rock on the shoreline at Carsaig.  The emptiness of the shattered landscape, characterised by devastation of the volcanic activity 65 milion years ago and more, and the rocks that had fallen down and still remain at the shoreline today.  It’s a scene frozen in time, a prehistoric ghost town which (facing in this direction, at least) looks never to have recovered.  The immediacy of the volcanic force hits you in the face as if it only happened yesterday, or last week.

I wanted an image that would capture the haunting weirdness of the scene – not a pleasant landscape with blue water and the horizon in the distance – that just wouldn’t be right for how I feel here.  On this foggy day, only the first few yards of the sea seemed to sit at the shore before fading into a curtain of white invisibility.  The mystery of the weather leant a sense of eeriness to this mysterious place.

This is what exactly my photography is about, the connection between the human imagination and nature.  It’s why I call this blog Human Nature.  The weirdness of the scene makes the imagination run wild; and I really hope that this is a weird picture to reflect that view.
Posted by Kris at 05:00 No comments:

Rugged coastlines on the Isle of Mull

Travelling around the Isle of Mull and soaking up its stunning scenery, the varied, rugged landscape of hills, valleys, coastal lochs and woodland clearly shares many characteristics of the Scottish mainland, sharing also the dramatic weather, changing light and sunshine, cloud and rainbows. But the story of Mull’s landscape is very different, and the island stands out for being geologically more complex than most of its neighbours.  To see the difference, you need to go to the coast.

I’ve started to document parts of the coast more recently with a series of landscape pictures, some of which will appear on this blog over the next few weeks.  There is truly an embarrassment of riches here for interesting coastal scenes quite different from anywhere else on earth.

The island was at the centre of a large amount of volcanic activity around 65 million years ago (around the same time at which the dinosaurs were wiped out to extinction) which created many layers of rock which form the foundation of the island we know and love today.  Trapped within the layers of rock is evidence of plant life which reveals the climate at the time would have been subtropical.  In areas such as Carsaig, where the volcanic rock characterises the landscape, there are stretches of bare rock which take on the appearance of post-apocalyptic devastation at the foot of the staggering cliffs, whilst elsewhere along the same coast, the running waters and plant life give the impression of verdant rejuvenation of life around the dramatic shape of the landscape.  Nevertheless, these areas can take some serious trekking to get to.

In some places the flowing lava cooled to create the characteristic basalt columns for which the area is well known (nearby Staffa is the most famous example), while in neighbouring regions  there are ancient crystalline rocks and pink granite stone.

The island may be best known to visitors for its beaches and hills, but taking a trip to some of the more remote areas of coastline can be quite an eye-opener.